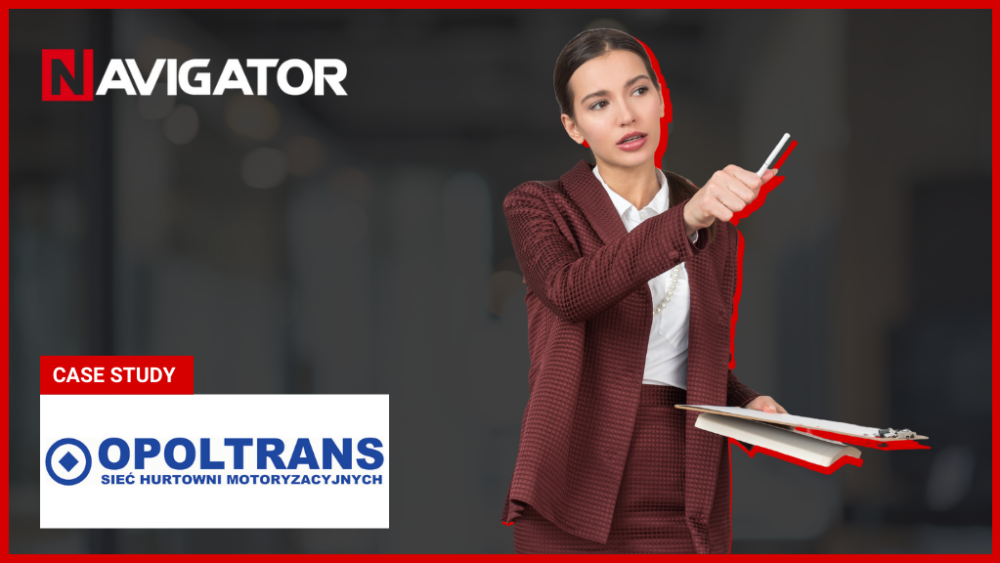 On December 2020, OPOLTRANS joined the ranks of our customers, which we announced on our website at the time.  By then we already knew that it promised to be a fruitful cooperation.

OPOLTRANS is a Polish network of automotive wholesalers, providing a wide range of products necessary for the maintenance and operation of transportation. The company’s origins date back to 1990. “We are always where you are” is the company’s slogan, as evidenced by its warehouses throughout Poland, which guarantee prompt service at the highest level. It also ties in with the company’s mission to be a partner to the customer who understands their needs and quickly adapts under a dynamically changing market

Running a large company requires organization and transparency, as well as good structure and planning.

Before implementing NAVIGATOR, the company already had written procedures in the form of manuals and bylaws, which were supported by structured email correspondence that maintained the company’s standard. Nevertheless, the company also had a severely limited filing solution and several systems, written by the IT department.

This worked well for years, but there came a point when, naturally, the next step in growth was complete digitization.

With the development, there was a growing need for a system that would streamline and facilitate communication, as well as bring all procedures together in one place, while automating repetitive tasks, thus saving staff time.

There were also many times situations where quick decisions were required to be made by competent people with access to relevant data, so the company needed a system that would allow interested and properly empowered people to directly, quickly, securely and easily access information right in the system at any time, without the need for third parties.

In summary, the company needed a system that would bring all procedures together in one place.

The selection criterion and NAVIGATOR

The company learned about NAVIGATOR during one of the many webinars conducted by our partner BPC (link to events). After analyzing the available materials and information, Ms. Malgorzata Segiet contacted the sales department, which conducted a series of presentations of the system and provided additional consultations about it. Ms. Segiet emphasizes that she was able to get well acquainted with the system even before implementation.

NAVIGATOR met OPOLTRANS’ requirements, such as: 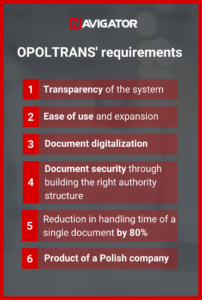 Ms. Segiet emphasizes that most of the requirements were the standard in the NAVIGATOR system.

We started the implementation with a thorough pre-implementation analysis, where the team assigned to the project, together with those responsible from OPOLTRANS, carefully analyzed all the company’s processes. Then the construction of processes began, including:

But that’s not the end of the story – in the course of the implementation, certain processes have developed, changed, and new ideas have emerged, so even more fruitful cooperation awaits us, with the aim of continuously developing the system and adapting it to the client’s needs. This is what connects us with OPOLTRANS.

The implementation of the NAVIGATOR system was aimed primarily at organizing processes at OPOLTRANS, which has been successful. Full knowledge of the matter being handled and a quick overview of the situation made it much easier and more efficient to run the company at the management level. Nevertheless, the benefits are also noticed by the system users themselves, who now have easy and transparent access to information.

Apart from the fact that this is only the beginning of automation, users can already take advantage of it in situations such as when the system informs them of a duplicated invoice and does not allow them to reprocess it, or when they check the status of inventory documents directly by sending a query to the integrated ERP system.

Deprovisioning was also an important factor in choosing a system. Despite the environmental pluses, it is also associated with time and budget savings.

Implementing such a system was particularly important given the distributed structure of the multi-branch company. It was important that documents go straight to the central system with full user authorization, without having to send it additionally by transport/email/other system.

The system is simply easy to use and intuitive, ideal for ordinary non-IT users. For IT users, it is simple to expand and administer, and meets the requirements important to us of maintaining appropriate data authorization for users in a multi-departmental structure,” says Ms. Malgorzata Segiet – project manager on the Opoltrans side.

We are very happy to cooperate with Opoltrans and look forward to new challenges, which we will promptly announce on our website.

Tourism and Leisure Management graduate at IMC Fachhochschule Krems. After finishing university, she decided that digital marketing was her calling. At Archman she acts as a marketing specialist, where every day she broadens her knowledge about SEO and SEM. Mariia is keen on storytelling, and in her free time most frequently she reaches for Stephen’s King novels.

NAVIGATOR has been succesfully implemented in KGHM Polska Miedź S.A.