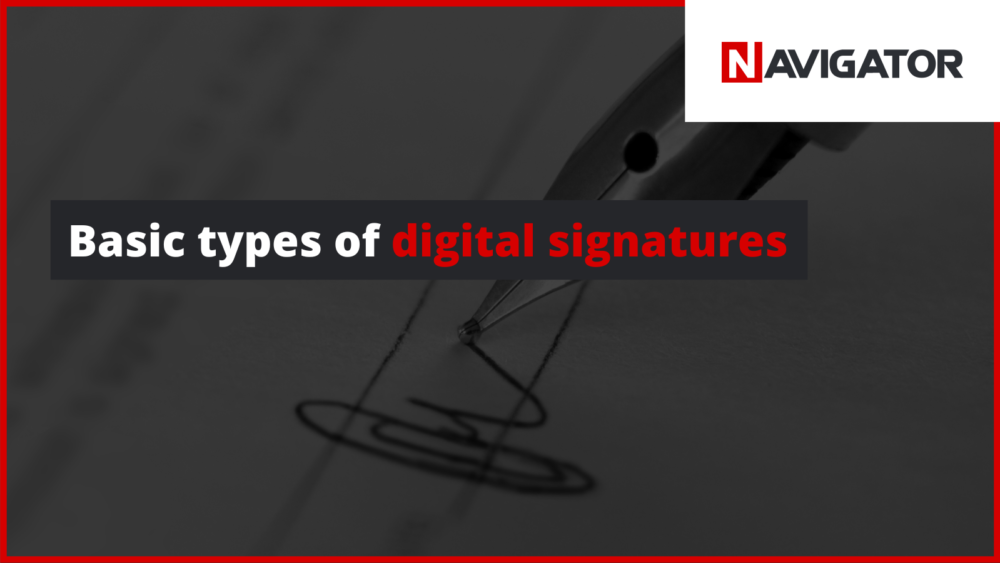 Borders between offline and online activities are getting more blurry. With that, the possibility to authorize yourself via the internet is becoming more important. Digital signature as a tool with legal power in Poland was introduced in 2016, however IT gained może of its popularity thanks to the pandemic, because companies, when in a new reality, were obligated to move business processes to the digital sphere.

It is worth mentioning that Profil Zaufany had also a significant impact on electronic document signing popularization.

What is a digital signature?

Digital signature is a tool that guarantees document authorization, meaning it allows the user to identificate the person who signed the document. No matter which type of signature, it requires one specific person which makes it similar to a hand signature.

Digital signature, as the name suggests, is a new technology development step, which allows to confirm a person’s identity without paperwork. This signature is treated as serious as the personale signature thanks to the mathematical algorithm, which can identify the authenticity of information contained inside a document.

Document that is signed digitally loses its value in case of data modification. The safety of this tool is evidenced by the fact that digital signatures are used by governments.

Digital signature is doing his job based on tools that are offered by certificated suppliers. For a signature to be valid, it has to be signed by a real person with all the conscience. Digital signature must fulfill requirements stated in an ordinance, based on which he was created. In the European Union eIDAS (Electronic IDentification Authentication and trust Services) is the one.

There are three types of digital signature: nonqualified (also called simple), advanced and qualified. As the names suggest, signatures can vary based on the level of advancement.

A Simple signature, also called a nonqualified one, even though it has some legal force, is not as relevant as a hand written one. Signatures like these don’t require identity verification and that’s why they’re less advanced. It doesn’t have to be contained on seperate device. From the technical point of view even the signature in the email footer can be treated as a Simple signature.

In order for a regular signature to be legally valid, it has to be signed as a trust service. It means that the third party needs to be involved – usually an authorized company, which guarantees the authenticity of data. Even solutions as simple as these can allow us to digitize many of the processes with the usage of standard procedures.

Signing process is very easy: usually it requires only a few clicks. The same goes for document sending: it doesn’t require identity verification. Usually signature is granted after pressing the verification link or sending the identity document scan. That is the reason why a simple signature is not equal to a handwritten one. It doesn’t cause any law consequences, because it can easily be falsificated. It has little to none evidential value. It is used as any kind of document authorization. You may not know this, but you are probably using it on a daily basis in your company. Most of the time basic signatures are used in online communication. But since it isn’t too secure, you shouldn’t be using him with important document authorization.

Advanced signatures are the next type of digital signatures. Subjects using them don’t need all of the requirements that qualified signature covers. That means it’s more advanced than a basic signature, but still is not as valuable as a handwritten one. This signature is not based on seperate device certificate, but is still a decent alternative for simplifying of business processes, because in every case of document changing it requires saving. Otherwise the document becomes unofficial. It is also assigned to a particular person.

A qualified signature is an advanced signature, which is submitted by a qualificated device and has an authorized certificate of electronic signature.

The signature data can not be stolen, since it is being stored on a special device. Qualified signatures need to be bought in a certificated provider, which means that all of the documents signed with it have the same legal force as the ones signed with handwritten signatures. What’s more, this force is spread throughout the entire region of the European Union. Document signed with qualified signature is being verified automatically in pdf readers.

Digital signature guarantees the authenticity and ensures safety of the electronic translations. It is an important step of the strategy of digitalization, because it can be a replacement for a handwritten signature. It protects from identity thefts and scammers. On top of that, a digital signature allows us to complete our job and sign the documents without leaving the house or the office. If you want to let go of a paper documentary, you can’t go around it. The natural use of digital signatures is signing of contracts and documents of any type, which otherwise would be signed by hand. It is also being used to sign certified translations, certificates or diplomas.

Get to know more about Electronic Workflow, AI, Business Intelligence and No-code applications in NAVIGATOR system

Digital signature is a logical step in cybersecurity evolution. It has plenty of advantages and should be taken into consideration as a potential digitalization tool, because in a longer perspective it would save time and money. There are three types of e-signatures, all of which can be used in different scenarios and in every company type: from single person businesses to huge companies.

Tourism and Leisure Management graduate at IMC Fachhochschule Krems. After finishing university, she decided that digital marketing was her calling. At Archman she acts as a marketing specialist, where every day she broadens her knowledge about SEO and SEM. Mariia is keen on storytelling, and in her free time most frequently she reaches for Stephen’s King novels.

Previous post
Take advantage of the opportunity that is automation in business
Next post
Cost invoice workflow vs. budget management